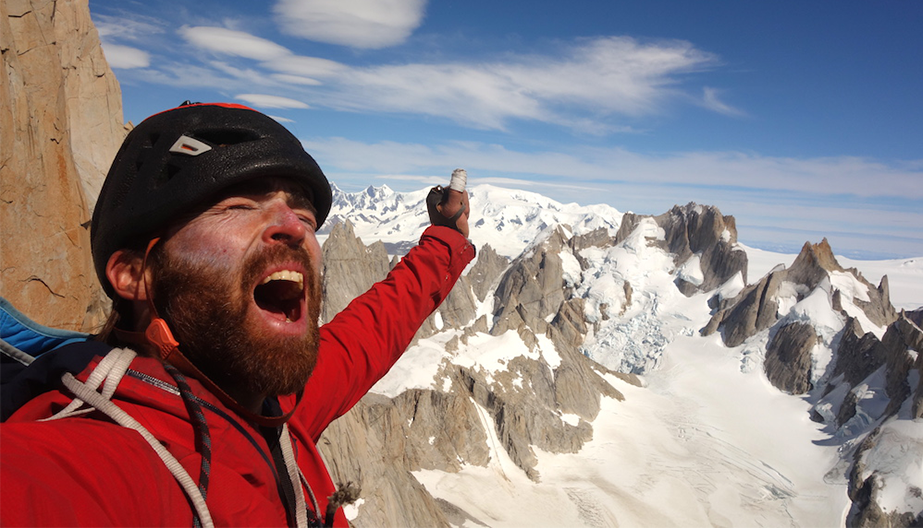 Congratulations Sean, you have realised a dream. Colin Haley, who knows a lot about Patagonia (and also about solo climbs), described your ascent as "the most impressive solo climb ever done in Patagonia, with logistics that are difficult to even imagine.” Where did it all start?
"I started thinking about the Fitz Roy crossing after Tommy Caldwell and Alex Honnold did it a couple of years ago. I liked the idea of climbing such a long and visually stunning route, testing the musical acoustics from each peak.”

Did you immediately think about climbing it "solo"?
"Actually I was thinking of going there with other people. Convincing Nico Favresse to come with me would have been very easy, no doubt about it! We’ve climbed together for 25 years and shared many adventures. We’re an efficient rope team, we climb fast and his little guitar provides good musical accompaniment. When the idea of going it alone first came into my mind, the challenge seemed simply too big, almost daunting. I thought I'd have a look at the climb report without any expectations and see what emerged if I could piece it all together. During the long austral winter evening, I had plenty of time to imagine and plan... As the seed slowly started to take root, I began to think it could be done. It seemed realistic to assume that it would take about ten days, but if there was a window of decent weather for six days (already extremely rare in Patagonia), I would simply have a go at it. Just out of curiosity to see how far I could get.”

Was your training any different from normal?
"My training is based on running, beam exercises, swimming (only in freezing water), lifting logs and other heavy things I find around, pull-ups, push-ups, stretching and mobility, yoga, Tai Chi, Qi Gong, meditation and visualisation... In short the usual stuff."

You spent a year in El Chalten. Why did you decide to spend the initial lockdown and then such a long time down in Patagonia? Is this the place where you feel at home?
"I feel at home anywhere I take my rucksack off my shoulders and put it on the ground. The winter in Patagonia was wonderful. Very cold, with lots of snow and ice! I bouldered, sport climbed, skied, trained and climbed icefalls. I also learnt to play a new musical instrument, the Irish bagpipes. I'm really enjoying this! At first, I was stuck here by the lockdown, as my flight was cancelled. Then, if I really wanted to go back to Europe, I could have contacted the embassy. It seemed complicated anyway and I really like it here a lot. After the initial lockdown, there were no more Covid cases in El Chalten, the atmosphere was relaxed and life carried on peacefully."

Why did you choose to attempt the crossing in the opposite direction to that made by Tommy and Alex?
"I just wanted to do something different, climb in unknown terrain, try a new challenge."

Were you ever afraid? Or felt the need to have a climbing partner?
"It was my choice to go up there alone. This is what I wanted and what I was looking for. I’ve never regretted it."


You turned forty during the crossing, happy birthday! What was your birthday cake like?
"I celebrated with seven birthday cakes, all gluten- and sugar-free: Aguja de l'S, Saint-Exupéry, Poincenot, Rafael-Juarez, Fitz Roy, Mermoz and Guillaumet. Granite is hard as iron, occasionally topped with ice... Delicious!"

You are a climber who specialises in free climbing on big rock faces and difficult routes in remote places. You were never known as a loner.
"It's true, I don't have much experience as a solo climber, so I trained for this goal. I’ve always admired Silvia Vidal, her approach and her philosophy. Her strong ethics and her ability to immerse herself in the mountains for a long time on her own, without contact or any outside help.
The five days alone on the top of the Fitz Roy were magical. Labouring along metres and metres of rope, up and down, sunrise and sunset, with condors flying past me to say hello. It was a profound experience, I feel I lived it to the full!"

What were your thoughts on the summit of Aguja de l'S, the first summit?
"This is a marathon, not a sprint. Take it easy Sean, you're having a wonderful adventure!"
And what did you think at the top of Guillaumet, the last peak of the skyline?
“It's a dream. I’m living a dream that’s turning into reality right now!”