In order to give due weight to the Spaniard's record, it is necessary to start from the two skyrunners who had managed to achieve the feat before him. Collè and Brunod are in fact legends, athletes with decades of experience who know Monte Rosa practically rock by rock. And it was one of their most complicated records that Merillas ended up in his sights. For the challenge, he wore the Golden Gate Kima, the skyrunning shoes with the carbon plate immersed in the soles, capable of giving (as scientific tests have shown) a 2% energy saving.
Merillas set off from the centre of Gressoney at 5.30 am.

The segment of pure ascent, very hard, the one that expert hikers complete by squeezing out all their energy, was completed in 2 hours 46 minutes and 20 seconds with the arrival at the highest refuge in Europe, Capanna Margherita, which stands solitary and majestic at an altitude of 4,554 metres. At the summit, he was about four minutes behind. On the descent Merillas then showed off all his technical genius, swooping down to the start in one hour and 13 minutes, doing better than even Brunod's frantic descent. Thirty-one kilometres and 2,900 metres of elevation gain (first positive and then negative), were swallowed up in less than four hours as he danced with gravity across trails, scree, moraines and glaciers. 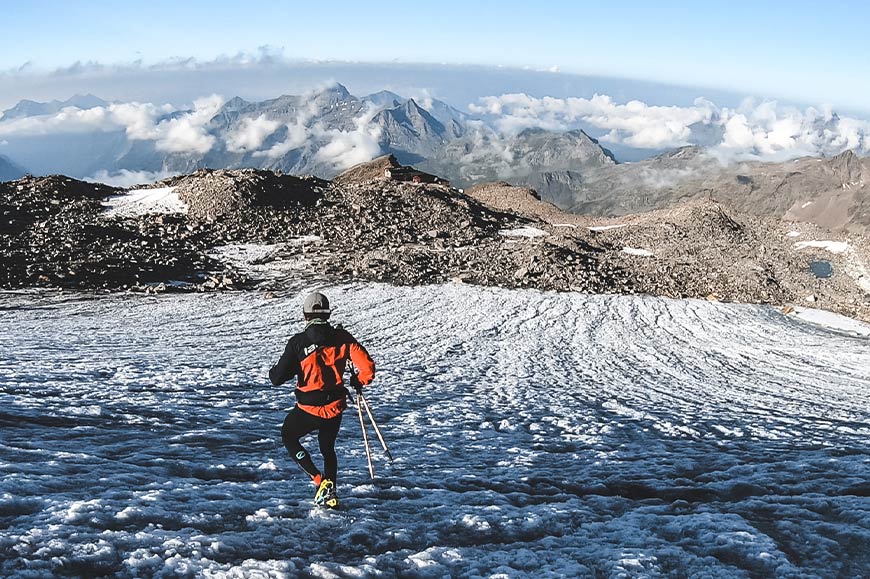 To give a dimension to the feat, this is more than half an hour less than the previous record, which had already been improved by a quarter of an hour. There will no doubt be those who want to beat it in the future, but the bar is really high for this FKT. And it is no coincidence that Collé himself took part in the feat, giving Merillas some final suggestions before the start. Halfway along the route, SCARPA's product manager for trail running, Marco De Gasperi, also encouraged him. Encouragement gave him the strength and lucidity to complete a feat that will remain in the annals of skyrunning.