It took us eight days from the Aconcagua park entrance to reach this point,
and over ten years of experience to be comfortable standing here about to
jump. The first three days took us along the Vacas valley, following a river
raging with glacial meltwater. We crossed it on the morning of our third day
when it was at its lowest, and then began the punishing ascent to our base
camp at 4,200m.

Now began the real acclimatisation. We gave ourselves a rest day before
pushing upwards to Camp 1, and then onwards to Camp 2 - our highest
camp. At 5,900 metres it was the highest any of us had ever slept and
although the night was full of restlessness, broken sleep and cramped
conditions, we were acclimatising well. The next morning we attempted a
summit push via the Polish Traverse, exhaustingly breaking trail all day. 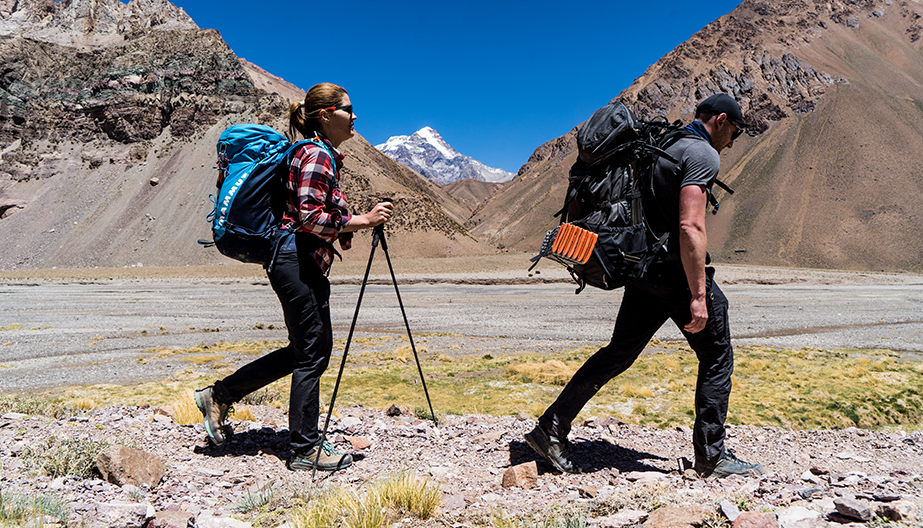 Finally pushing round to the west face, we were hit by a wind so extreme
that onwards progress came to an immediate halt. With only 300 metres to
push, our summit attempt was abandoned. I had prioritised summiting over
any wingsuit jump, as this allowed for a goal that could be shared by all the
team. It would also lessen the self-imposed pressure I knew I’d feel had a
solo wingsuit attempt been the trip’s primary goal. But here we now were,
with an abandoned team summit, and an opportunity for Plan B – a
wingsuit flight from a mountain that had never before been jumped. 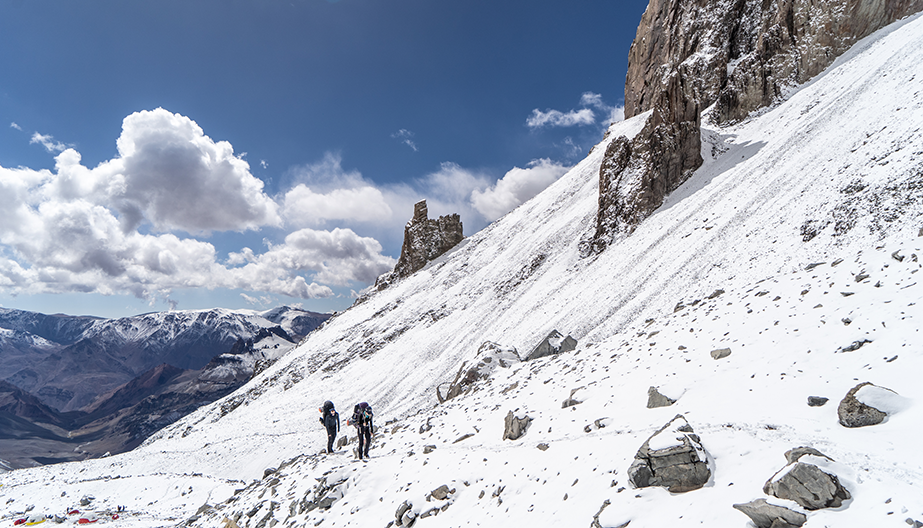 I had already scouted a possible exit point a few hundred metres away
from Camp 2 at almost 6,000 metres, which gave some decent landing
options on the moraine below. So the next day, on re-approaching the exit,
I passed a bolt and some tat on the wall and noticed a bag on the ground
stuck in the snow. It was an unusual position to find tat like this, and there
was no need for a bolt to be on such flat terrain. It stuck out as an
obscurity. I tugged at the bag expecting to find some crag swag but
unexpectedly found a human skull. Dropping the bag instantly, I beckoned
Jimmy over and told him about the grisly discovery. I had seen many skulls
and corpses over the years, but this hit me because of the unexpectedness
of it all. It wasn’t a war-torn country, the site of an ambush or a poverty-
stricken village in a third world country; it was a glacier next to our
campsite. I had never seen a corpse in the mountains before. 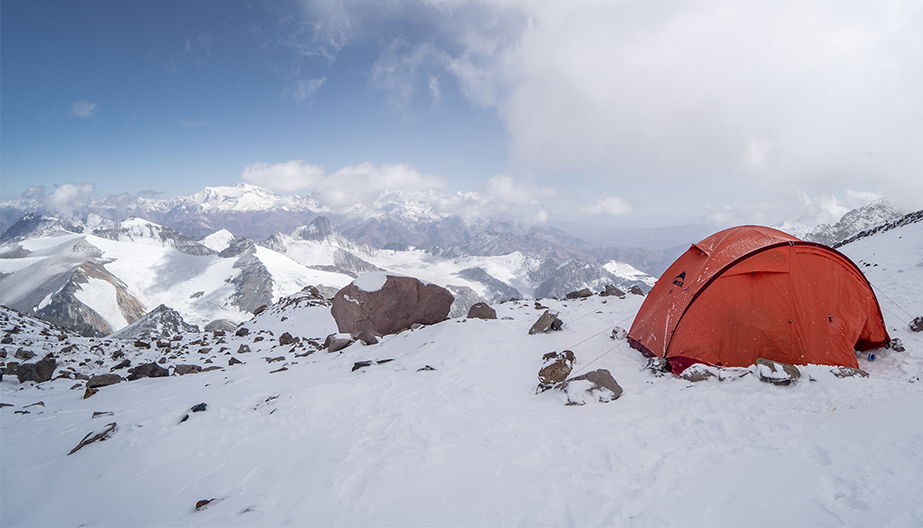 Fifty metres past the body, slender fingers of rocks protruded from the cliff.
I searched for the steepest and most accessible one, avoiding the heavy
cornicing. Throwing a rock over the edge, I counted until I heard the impact
six seconds later, meaning I would have plenty of height for the wingsuit to
inflate and begin flying. I would normally use a laser range finder, but I was
happy on this occasion that the vertical drop gave plenty of room for error. I
had already calculated the glide ratio needed to reach the landing below,
using various mapping tools.

The gear at this altitude would also be different to my usual jumps. I wore a
gilet over a base and mid layer. It was the perfect system as the arms
wouldn’t get stuck in the zipper of my arm wing with so many bulky layers.
At 6,000 metres the air pressure is 50% less than at sea level, which would
affect the inflation of my wingsuit and the handling characteristics of my
parachute. I had to take this into account and give myself a larger margin
for error than normal. I calculated and carefully thought through all the
factors and eventualities, conscious of just how theoretical this was given
that I had never jumped from an altitude this high before. 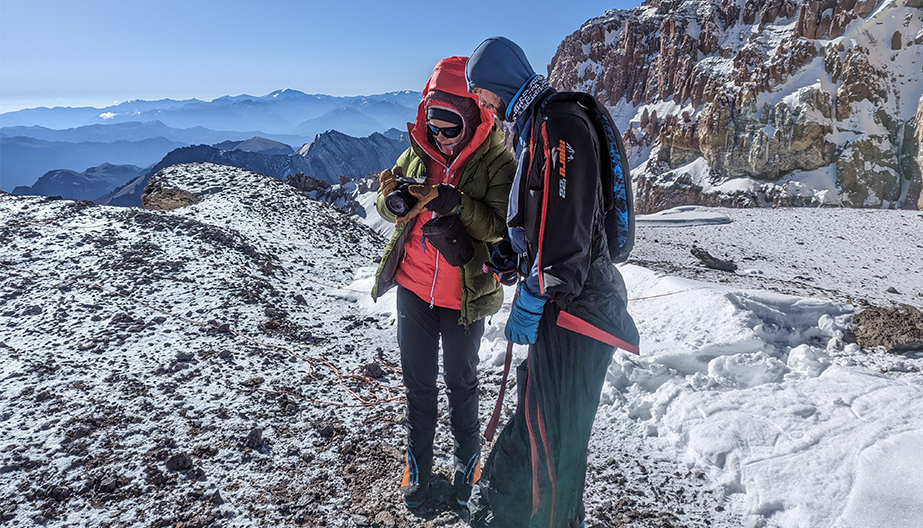 The main worry was the weather, on a mountain known for routine wind
speeds of up to 100 kph, although I’d noticed a pattern of calmness pre-
9am on all previous days. Clouds were not really a concern here like they
were on a previous jump on Kilimanjaro. Ewa, my wife, joined me on the
exit, her hands and feet still numb from the summit attempt the day before.
“Only jump if you are 100% sure,” she said.

Her second opinion was invaluable, as was her calmness. On other jumps,
margins can be squeezed a little, but I wanted nothing to go to chance
today. I spotted my landing, and knew that the anabatic winds should be
running down the glacier so I could plan my landing pattern accordingly.
I walk out onto the finger of crumbling rock, regain my composure and
count down from three. All doubt disappears, and I feel only confidence as I
launch. I’m aware of the lack of air density as I fall, although can feel the
wingsuit beginning to inflate – and suddenly I’m gliding. 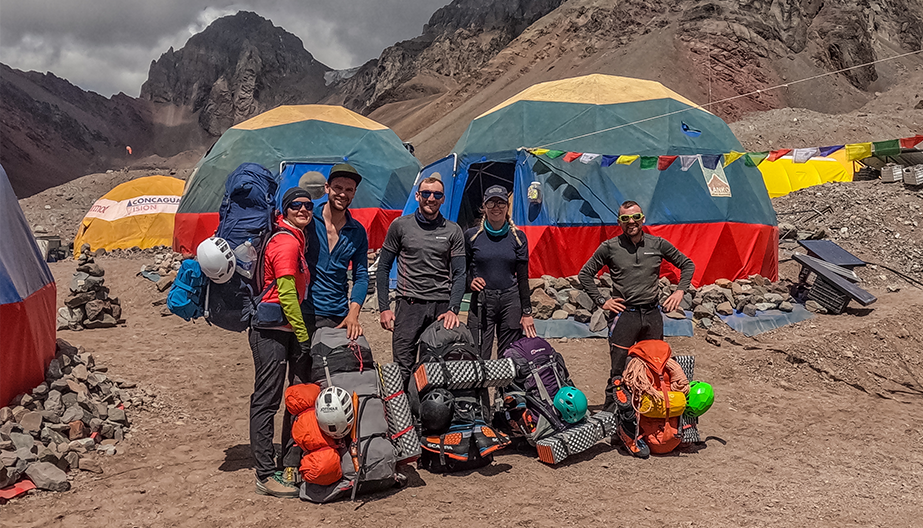 Reflecting on this jump, the hardest part for me was to find confidence. Or
at least the correct level of confidence, as well as being true to myself and
understanding my own ability. It has taken me over a decade to gain the
experience to fly wingsuits at high altitude, a progression which always felt
inevitable to me, combining my love for the mountains and BASE jumping.
But to be confident enough to take that leap, but not recklessly
overconfident, was the hard part. I’ve recently found that conquering fear
comes with acceptance; in this case serious injury or worse. And while I
clearly don’t want this as an outcome, I can accept that it exists as a
possibility. But, I also feel comfortable in my ability and decision-making to
reduce the risk as much as reasonably possible.

My landing was fast, but on easy terrain. While packing up my gear I
thought of the friends I’ve lost this year and the body next to our camp.
These people gave it their all, but the margins were too fine. I want to be
flying and exploring with my wife for the rest of my life, and that requires
leaving enough in the tank to get back home.